The name of the country may translate as Rich Coast but undoubtedly you sure need to be a Rich Tourist to come here.  It’s by far the most expensive country we’ve visited in the Americas to date and it’s taken us a little by surprise.  The tourist industry is extremely well organised and boy are there lots of ways to get the million plus annual visitors to part with their cash.  Spend spend spend. 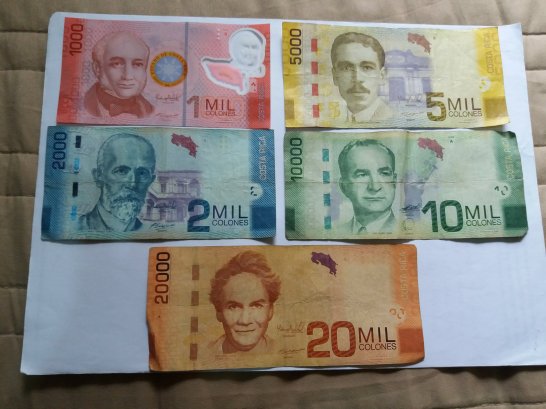 Although the country has its own highly decorative currency (colones), it can be a little confusing as there are a lot of noughts involved (1 GBP is about 800 colones) and so to make it just that little bit easier for tourists to part with their money, most tour or shuttle bus transfer prices are quoted in US dollars and the greenbacks themselves are widely accepted (as are credit cards).

It’s not just the tourist trips and guides that are expensive – food is too and the cost of dining out here is not dissimilar to prices in Europe so you have to pick and choose a little carefully although in some places (like the tiny Santa Elena/Monteverde), there isn’t a huge amount of choice.  Still, it doesn’t seem to put people off: we have seen far more Western tourists here than anywhere else on our trip to date (perhaps bar SE Asia), even though it is still pretty rainy at the moment in this, the shoulder season approaching the drier (and high) season.  This was in evidence right from the off: there were long queues for immigration at San José airport and in our first week here, we haven’t managed to escape the tourist crowds.  But at the same time, it’s not difficult to see why Costa Rica is so popular given its scenery (when you can are lucky enough to get glimpses of great views through the clouds!), its biodiversity and its contented ethos summed up in the country’s catch phrase “pura vida” (the pure life).