So in the UK, the idea of munching on a rice cake doesn’t really do much for me.  To me, they are associated with the latest fad diet or some desire “to be good” food-wise for a while.  They are the sort of thing that remains in my cupboard a bit too long, way after the fad diet or desire to be good has been consigned to the history books (which is normally pretty quickly in my case).  In fact, I can’t help but raise an eyebrow when people wax lyrical about them and/or openly choose them over let’s say a (far tastier) Jacobs Cream Cracker.  But each to their own I guess.

But in Hué in central Vietnam, a whole new spin is put on the term rice cake and these little snacks rock, no doubt because they don’t really bear any resemblance to their UK namesake (unsurprisingly, a very good thing in my opinion).  They come in all shapes and sizes but have a number of similarities as they are all made of rice flour and are usually topped with shrimp or pork and served with sweet fish sauce and chilli (needless to say, they taste a whole lot better than that description suggests). 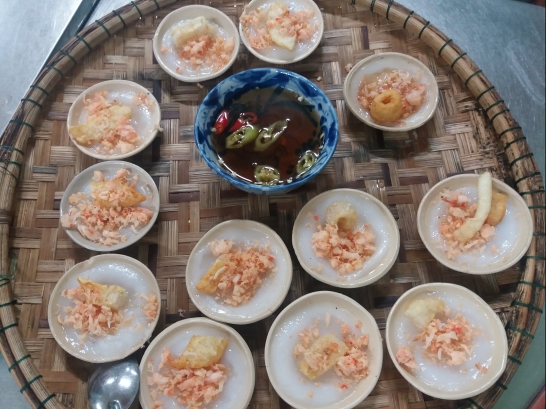 L: Banh beo;  R: Banh ram-it (and no, we didn’t get short changed here (I just forgot to take the picture quickly enough))

There’s banh beo served in tiny dishes which we were told to eat “just like oysters”, i.e. all in one go, and banh ram-it which were a bit crunchier as well as more melt in the mouth transparent dumplings called banh loc.  However, my favourite were banh khoal (crispy fried filled pancakes stuffed with shrimp, diced green onion, carrot and bean sprout served with vegetable and peanut sauce).

Each region seems to have its specialties.  After leaving behind the royal rice cakes of Hue, we moved onto Hoi An, described in the guide book as a “culinary hotbed”.  Here again we came across dumplings in different shapes and sizes, most noteworthy Hoi An’s signature dish of banh vac (white rose) which again are shrimp dumplings topped with crispy onions and also, we happily ploughed through many a dish of hoanth thanh (crispy wontons). 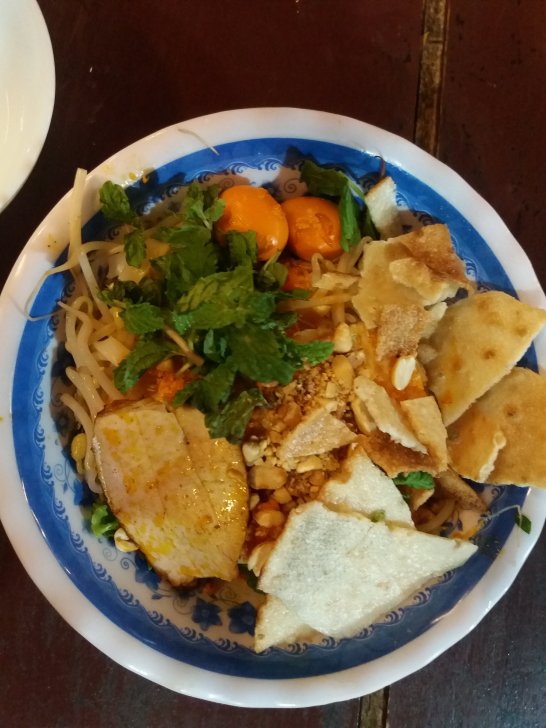 But don’t be misled, food other than dumplings is available and unsurprisingly there were some good noodle based dishes on the menu, my favourite being mi quang (a bit of everything really including hard boiled quail’s eggs) as well as the more locally renowned cao lau (Japanese style noodles with pork, salad greens and bean sprouts (but no quail’s eggs!).

While we did eat in several proper restaurants, our best meal was definitely at one of the fixed food stalls on the Hoi An peninsula, where all the food was freshly cooked in front of us and each dish came out one by one (and kept coming).  The food was so good here we completely over-ordered but at about £1 to £1.50 a dish and the surprisingly drinkable local beer (bia hoi) costing only 4,000 dong for a half pint (about 13 pence) it would have been rude not to do so! 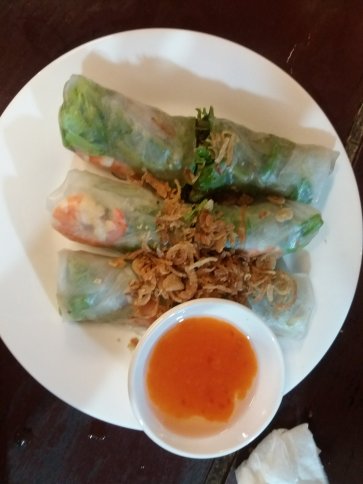 Some of Ha Lan’s delicious dishes

In fact the food has all been pretty good to date in Vietnam and, on balance, we prefer it to Laos (although their spicy coconut curries were great).  In both countries, we have eaten more than our fill of spring rolls, whether fresh or fried, and whether filled with prawns, vegetables or pork – you can have them any which way you want in SE Asia and seemingly wherever you want as they are a staple of pretty much every menu.

Shrimp pancakes, heads and shells and all!

There are also good food stalls around meaning you never have to go hungry.  We particularly like those which serve the humble banh mi (baguette sandwich stuffed to the brim with omelette, meat, salad and lots of other goodies) for 15,000 to 20,000 dong a pop (50 to 67 pence).  And then there are other food stalls selling things that are a little more odd e.g. a shrimp pancake which was fine in principle except the embedded prawns still had all their heads and shells on which made them a little crunchy to say the least.  It wasn’t that clear if we were meant to pick them all apart before eating but that wasn’t really possible given the way they were cooked.

And then there have been one or two dishes which perhaps we haven’t been sufficiently adventurous to try…. yet! 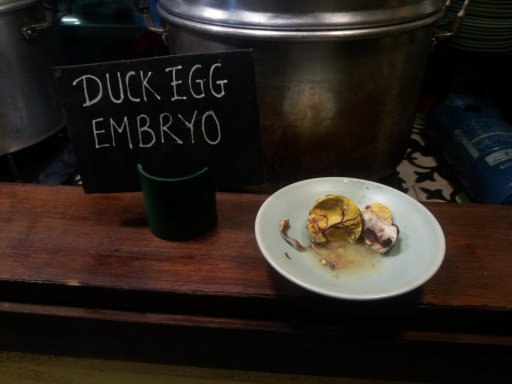 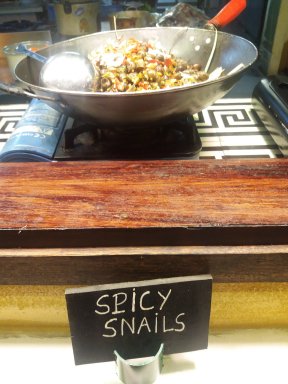 Anyone for duck egg embryos, silk worm salad or spicy snails?  Sadly (??), we’d already eaten by the time we saw that these “goodies” were available (at least that’s our excuse!)

As with all the other countries we have visited, we have not gone hungry at all!