In an attempt not to be outdone, both Wat Phu (in Laos) and My Son (in Vietnam) are billed as that country’s answer to Angkor Wat, Cambodia’s stunning and extensive temple complex. Although Cambodia is not on the agenda of this particular trip, we have both visited that spectacular monument on previous visits to this part of the world. It is stunningly beautiful.

Like Angkor, the Wat Phu site (built from the 5th to 13th centuries AD) comprises Khmer Hindu ruins and in fact was once linked to the Cambodian temples (which were built a little later on) by a 200km ancient royal road.

While the My Son ruins are also remains of Hindu temples (dedicated to the worship of the god Shiva), these were constructed between the 4th and the 14th century AD by the kings of Champa although the kingdoms were in fact all inter-related.

While both Wat Phu and My Son are pleasant for a visit (and in the case of Wat Phu, worth a 22km round trip sweaty cycle ride in the heat), I’m afraid Angkor Wat they are not and the billing as equivalent sites is not really justified. 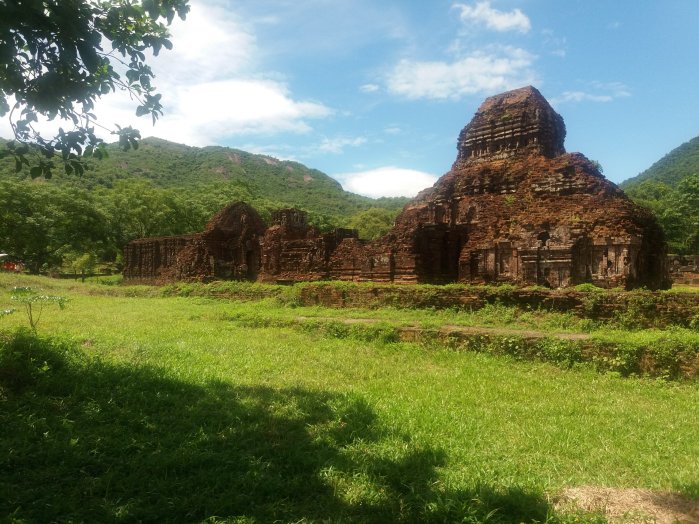 To be fair when comparing the sites, it doesn’t really help that conservation activities at Wat Phu have, to date, been pretty limited or that the US heavily bombed My Son during the Vietnam War. Today you can see a lot of large bomb craters in the middle of what was once a group of temples and of the 70 or so structures at My Son that were first discovered by the French in 1885, only 25 now remain.

There’s also been a fair amount of trophy hunting with various statues (and in particular, the heads of statues) having been carted off to France etc. Apparently just like the Greeks asking the British government for its Elgin Marbles back, to date the French response to the Vietnamese government’s request for the return of their artefacts has been a resounding “non”.