So it turns out that spotting geishas in Japan is almost as difficult as spotting tigers in India; despite their footwear (essentially high heeled wooden clogs), these girls can totter off at quite a lick when they want to.  They certainly don’t hang around for tourists to take their photos, that’s for sure!

Off we went on the “hunt” (or should that be “stalk”) in the Gion district of Kyoto.  Here we did catch a glimpse of 2 maiko (trainee geishas) but they shot out of their taxi into their boarding house (okiya) 10 metres away at lightening speed.  We had a couple of other sightings during our trip, but generally only fleeting glimpses into what I think is one of the most intriguing aspects of Japanese culture, especially in the 21st century. 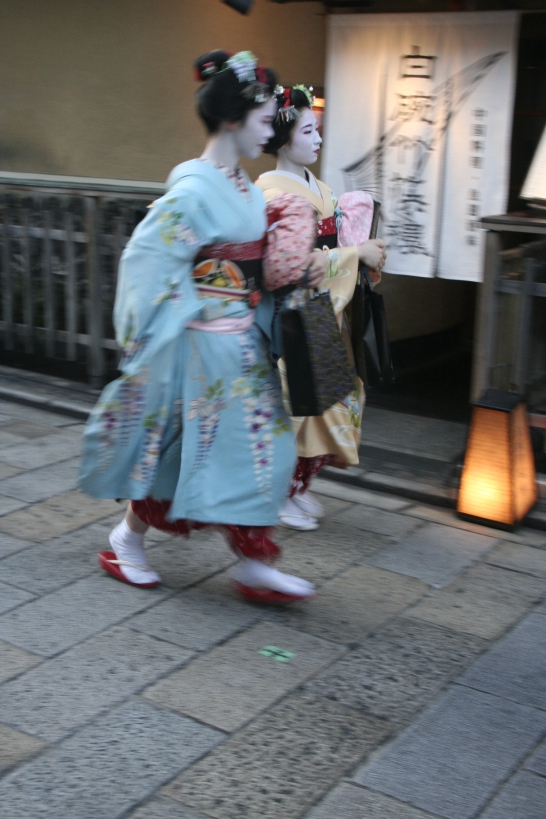 Blink and you miss the maikos.

Maikos start their training aged 15 and, if they wish to continue, will graduate to become geikos (the term used in Kyoto for geisha) aged 20.  They apply to become maikos but need the consent of both parents to do so.  If their application is successful, they then move into the okiya and here they are looked after by the okiya mother in lieu of their parents while undertaking their training.

The clothes and hairstyles of maikos are more elaborate than those of geikos.  Maikos wear their own hair in these hairstyles which they have done every week and which they then have to preserve by sleeping on a quasi-upright hard pillow.  That doesn’t sound like much fun at all: a few of our pillows have felt a bit like sleeping on sacks of ball bearings so I’m not sure how much worse an official “maiko pillow” would be. 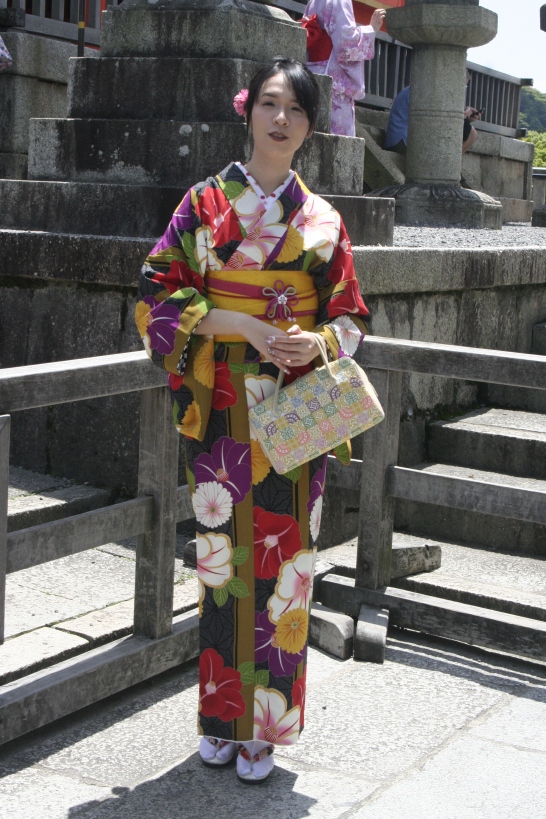 As maikos progress through their training, their clothes and accessories become less fussy until they become fully fledged geikos who are the most simply dressed and who also wear wigs. This has the advantage that they can move around incognito when not doing geiko business whereas the maiko’s hairstyles gives their identity away even when not formally dressed or fully made-up with the traditional white foundation and red eye and lip colourings.

As they are all obliged to preserve the air of mystique etc associated with this age old tradition, maikos are not allowed to do normal teenage things like using mobile phones, social media or going to convenience stores or Starbucks etc etc as this would destroy their image: instead, they remain in their cosseted traditional world of Japanese culture.  Apparently this rule is a bit of a breaking point for many young girls and is often why many choose to quit and return to “normal life” instead of pursing their geisha career.

We were told that a 2 hour rendez vous with a maiko and geiko would set you back about US$ 1,000 including food and drink in a tea house (an ochaya).   However, even if you have the ready cash, you have to have the right connections to get an audience with a geisha and sadly, we were not “in the know” and so cannot add this experience to our own trip memoirs. 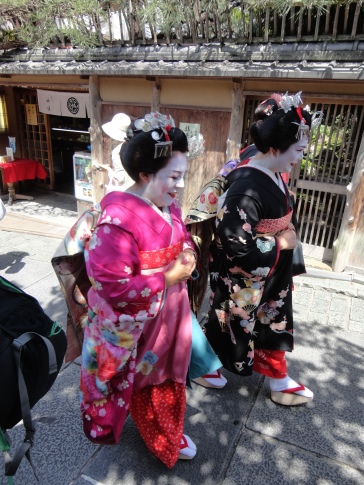 There’s a lucrative industry in dressing people up as geishas

Geishas and maikos provide entertainment to their guests, i.e. conversation, singing, playing musical instruments, dancing and playing traditional games including a version of rock, paper, scissors when they choose to be either a warrior, a tiger or an old lady (the wise old lady figure trumps the warrior as all warriors have mothers).

The traditional music, singing and dancing are particularly important skills: effectively geishas are regarded as bastions of the highest achievements in Japanese arts and remain in training throughout their careers to practice these traditional skills – apparently in Kyoto one active geisha is 86 years old and still attends geisha school.  “School time-tables” are displayed in public places in the geisha districts of Kyoto so that a geiko can always know where she should be going next.

L: Okiya entrance (with the names of maikos who live there above the door);    R: the geisha school time-table

Although our geisha sightings were pretty limited, there was no shortage of women dressing up in traditional dress and walking around the large towns, particularly in Kyoto, mainly to conduct their own photo shoots but also providing photo opportunities to opportunistic tourists.  By posing in geisha districts, some even managed to confuse unsuspecting western tourists too but they were definitely not the Real McCoy.

It’s all about getting the right photo!