10 May 2018:  After 6 hot spring baths and the accompanying 12 showers (one before and one after each bath), I’m not sure I’ve ever been cleaner (or for that matter, prunier).  It also turned out that any suntan we thought we had acquired in the Indian sub-continent was just 6 months’ worth of dirt as that all seemed to come off during the course of our day of bathing in Kinosaki, Japan’s quintessential onsen town.

As we are finding with all things Japanese, there is a pretty prescriptive etiquette to follow when visiting an onsen (hot spring bath).  First, you leave your outer shoes at the door of the onsen (for us, these were the Japanese clogs (geta) which we found challenging to walk in).  When you are ready to exit the building, you will find that the attendant has laid out your shoes for you ready for just to slip on: with no ticketing system and the fact that the geta can look fairly similar, this feels as if this has been done for you almost by magic (but is just yet another example of this country’s efficiency).

Inside your single sex changing room, remove all your clothes – all onsen bathing is completely naked (there are separate baths for men and women).  Then you have to sit down on a tiny plastic stool near a hand held shower and wash your whole body with soap etc. so as not to dirty the onsen water and you have to make sure that you have rinsed off all the soap and suds, again to prevent water pollution.  It’s also etiquette to wash down your shower area after use for the next person.

Then off you go into the hot spring bath itself: apparently you are meant to start with half body bathing to acclimitise to the hot water (but I only read this instruction a few days’ later together with the suggestion that you shouldn’t stay in the water too long (another instruction that perhaps it might have been helpful to know at the relevant time)).  Boy were the baths hot, some a little too hot and we became pink pretty quickly.   Our preferred baths were those with outside onsens as the natural coolness of the outside air compensated (in part at least) for the steaming waters.

While it is important that the tiny towel (which is the only thing that you are permitted to take into the onsen area with you) does not go into the water itself, it seems to be the done thing to fold this up and put it over your head, allegedly to prevent hot flushes while you bathe.  Looks ridiculous to say the least but then the whole experience did not always feel the most dignified although to be fair was quite relaxing (if rather hot: did I mention the heat?).

But onsen bathing does seem to be the thing to do, especially in Kinosaki where there are 7 public baths.  Here the experience is taken to a further extreme as we were provided with yukata (light cotton kimonos) and the geta by our ryokan and so off we went out in public (!) clip clopping down the streets from one public bath to another.  We were not alone: this was definitely the thing to do (and wear) in this small town and no one gave us a second look.  We even went out for dinner in our kimonos and on the way back “home” afterwards, stopped again for another bath and then had a final dunk in one of the 4 private baths on arrival back at the ryokan itself.  Because obviously you can never have too many hot spring baths!

Interestingly, the baths were relatively popular all day long but seemed to be more crowded in the evening: maybe instead of going to a bar with a girlfriend for a catch up over a decent bottle of wine, the Japanese instead choose to catch up while sitting naked in a hot spring bath.  After all, apparently their word for this communal bathing is “hadaka no tsukiai” (naked friendship). Not sure if this would catch on in London but hey, if we had the natural hot spring resources, who knows? 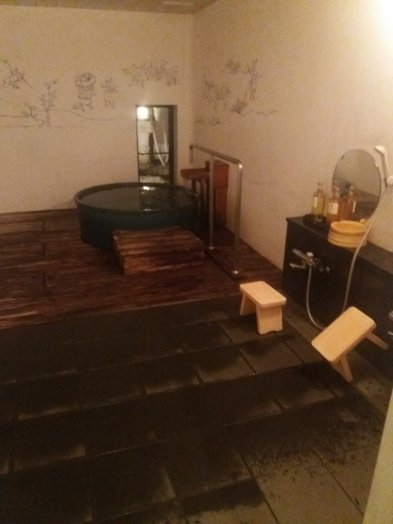 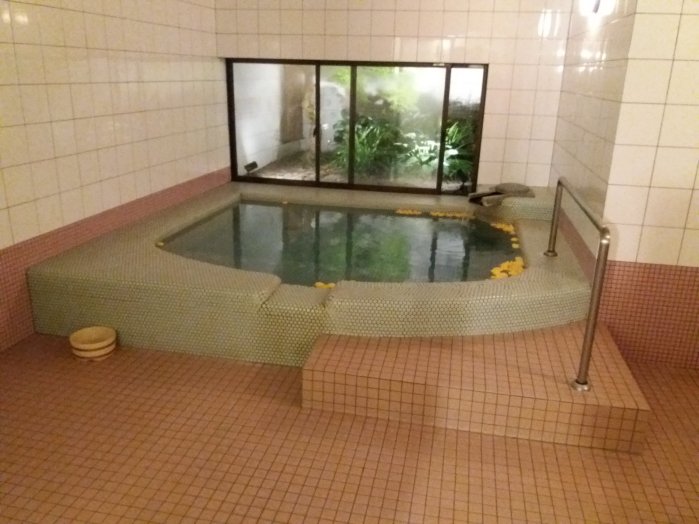 2 of the 4 private baths in our Ryokan (clearly taking photos in public onsens was not permitted for obvious reasons);