Some of the nuances between the different classes of Indian train travel are quite fine to say the least.  In any event not all trains carry all classes and of course you are dependent on the mercy of the booking system as to what class you actually secure.  In the course of our travels, we have tried out a few of them and, after several months of travelling round this vast country, we think we have just about nailed this.

Our favourite is 2AC (Two Tier Air Conditioned Sleeper): according to the National Rail Museum, this class attracts India’s upper class travellers so obviously we are in good company!  These compartments each have 4 beds and then there are two tiers of beds along the aisle outside the compartments.  Bedding and towels are provided and there are individual reading lamps which are great if people use these for lighting (rather than the main strip lights) when boarding/disembarking in the middle of the night. 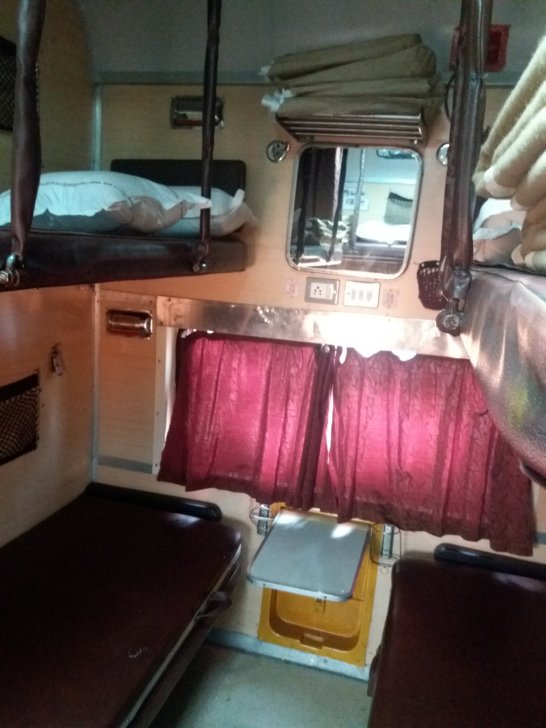 There are curtains on the entrance to each compartment as well as across each of the beds along the aisle which gives some privacy and the practice seems to be to keep these drawn most of the time.  This is quite good although it can make climbing up to the top bunk a little more tricky as you have to battle with the curtain while climbing the ladder.   Although this is only a curtain (rather than a proper door), given that there are only 4 people in your immediate vicinity, this hopefully should reduce the snoring potential (albeit if the next door compartment contains a particularly determined snorer, then that noise can still permeate your little curtained-off section!).  Luggage is stored under the bottom bunk and there’s usually a ring to which you can chain your luggage for safe-keeping especially on longer and/or overnight journeys. 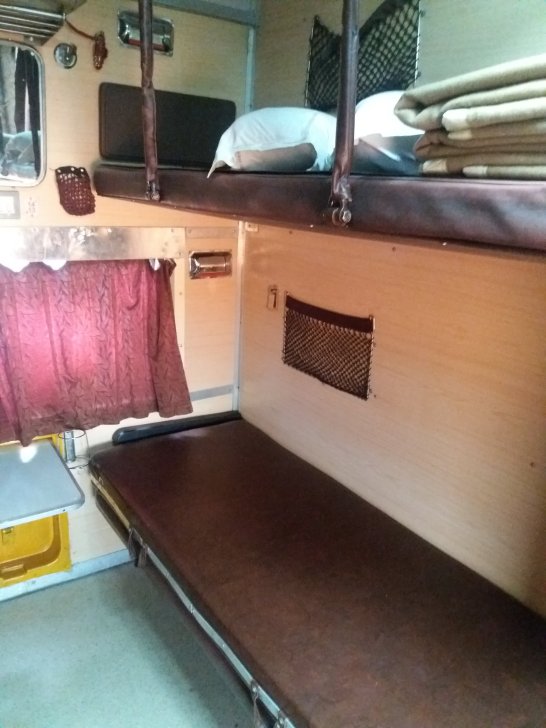 The most superior class (one up from 2AC) is 1AC (First Class Air Conditioned) which we have only tried out a couple of times and only once overnight from Varanasi to Kolkata.  It’s expensive costing about twice as much as a 2AC ticket and frankly, not really worth it.  However, for our overnight journey, we ended up in a coupé which only had 2 beds in it and so we had total privacy (and zero snoring potential therefore) so that was great and we got a pretty good night’s sleep.  Each compartment has lockable doors and is a bit wider than other classes as there are no side berths. 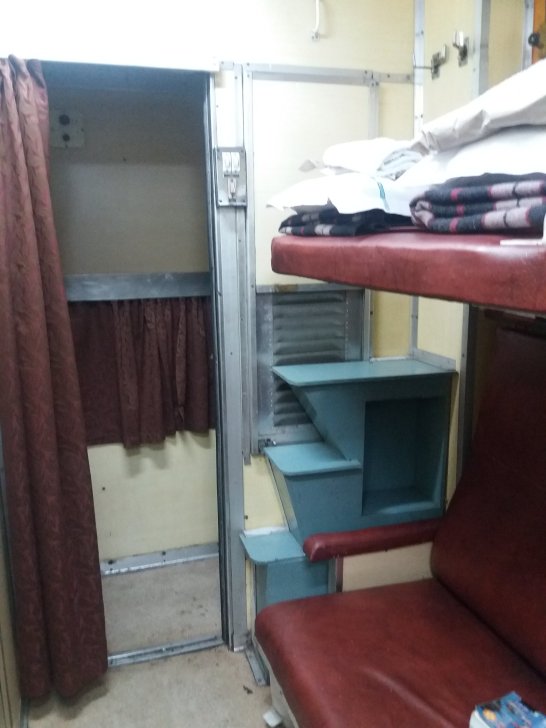 To get to the top bunk, rather than having to hoist yourself up using a ladder on the side of the bunks (which you have to do in all other classes which can be a little hairy when the train is moving), there is a little flight of stairs at the end of the bunk.  As in all the air conditioned classes, bedding and towels are provided.  There’s also sometimes some carpet on the floor although I’m not sure that this piece of rag justifies the extra cost!  When you read the official blurb about this class, apparently there is meant to be an attendant who will make your beds and give you a more personalised service and I also read that there are meant to be showers in these carriages: however, neither of these services materialised on our overnight journey but never mind (perhaps that’s only on some specific trains?).  The official blurb also says “this has an old school train travel charm”: yes, probably true (although no amount of charm (of any type) makes up for an excessively late running train!).

If we can’t get in 2AC, our next best bet is 3AC (Three Tier Air Conditioned Sleeper).  Essentially this is similar to 2AC but has three (rather than two) tiers of beds (6 in each compartment) plus two tiers of beds along the aisles again.  Also there’s no privacy curtains here nor individual reading lights.  Given the additional number of people, these carriages tend to be a bit noisier (both from hawkers and a higher snorer alert).  Bedding and towels are again provided. 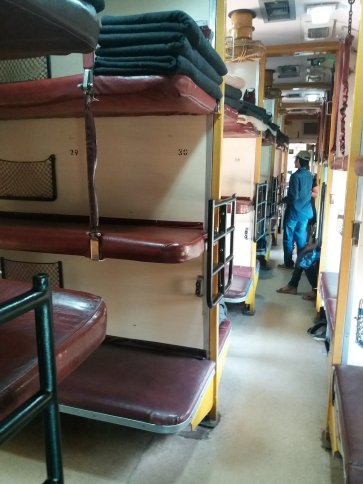 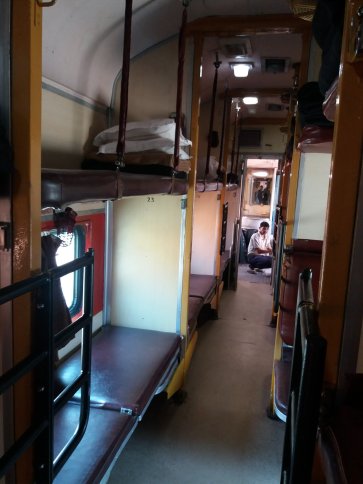 However, we’ve not always been able to secure tickets in any of these upper classes and have done a lot of our overnight journeys in Sleeper Class (SL).  We also take this class for any day journeys.  It’s incredibly cheap, ridiculously so really.  These carriages are set out like 3AC carriages: i.e. open-plan compartments with six beds in each and two tiers of beds along the aisle.   In these carriages, the furnishings are all blue rather than the maroon colour normally found in the upper classes.  Instead of AC, there are fans (which are pretty noisy) and the windows can be opened (all the windows have bars on them to keep out any intruders).

Sleeper class is perfectly adequate (and really inexpensive) but it can get a bit over-crowded (sometimes you see more than one person on each bed); apparently unlimited numbers of passengers can come into the carriages as it is possible to buy a ticket without a seat and just look for an empty seat.  As a result, when you board you might find someone in your seat but they will move once you show them your ticket.  I’m not always convinced that everyone in sleeper actually has a ticket: interestingly the railway has introduced geofencing on wifi systems to stop the sudden purchase of tickets i.e. if someone who doesn’t have a ticket suddenly spots the guard and tries to buy a ticket!  I’m not sure how effective this is but it’s a clever idea.

Sleeper class can get pretty noisy (it also seems to attract a higher percentage of snorers in my experience).  When we were travelling in Rajasthan in November, we also found it a bit cold (even with fans off and windows closed) and had to run off to the market to buy some blankets for our next journey as no bedding is provided in this class.  I suspect in the summer, it can get way too hot: some of our recent day journeys in this class would support that conclusion and we are only in April!  As with the other classes, luggage is again stored under the bottom bunk although the space can sometimes be a little tight: just as well we are travelling with rucsacs rather than anything larger which might not squeeze in!  As well as the high numbers of passengers, during daylight hours, you also have a continual flow of hawkers plying their wares and so all in all, it’s not always the most relaxing of experiences. 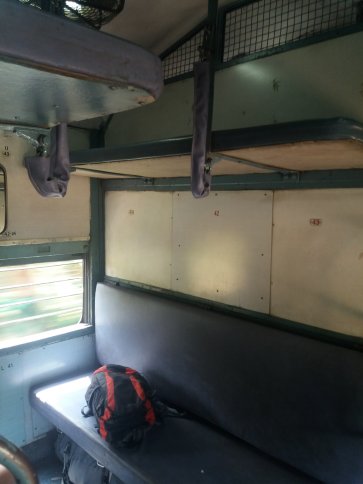 There is also Second Sitting (2S) class which are bench-style seats without any sleeping facilities.  At stations, you see vast numbers of people piling into these carriages (often after the train has started pulling out of the station) and they look extremely overcrowded although apparently you are still meant to have a reservation for this class (although I have no idea how that is policed).  Like most tourists and given the length of most of our train journeys, we haven’t tried out this class: it’s not clear where exactly we would manage to store our luggage either.

As well as choosing a class of travel, you are also given the option of selecting a preferred seat (although the website is at pains to point out that you may not be allocated your preferred seat).  Given there’s 2 of us travelling together, our modus operandi has always been to opt for an upper berth and a lower berth.  This gives us the all important “control” over the lower berth for those journeys which are half day/half night (whether by design or default due to later running trains), i.e. hopefully, we can choose when it’s time to adopt a sleeping or a sitting position.

The worst berth is the middle berth in Sleeper or 3AC – there’s not much head room on this berth and also, this is the one that is dropped down during the day to make up the back to the bottom seat.  But what if you are ready to get up but the person on the bottom bunk refuses to move from his or her fully reclined position?  Let the Battle of the wills commence……

The side berths give you more control in this regard: but the problem here is that they are shorter than the other bunks. If you have your day pack up with you on your bunk, that further shortens your available room meaning you can end up having to sleep in the foetal position which may not suit you all night long.  On the other berths you can stick your feet out into the corridor, albeit you take your chances of a passing passenger bashing into them especially when the train is moving.  But if you are travelling in 3AC, the side berths are pretty much the same as in 2AC (minus the curtains) so you may as well go for that and have a little more headroom and room during the day (as, if everyone sticks to the rules, only 2 of you should be on the seat rather than 3).

At the stations, if you have booked in any of 1AC, 2AC or 3AC classes, you are entitled to use the AC Waiting Rooms.  Unfortunately, we only wised up to the existence of these waiting rooms several journeys in to our trip.  There’s nothing particularly fancy about them, but if your train is late (which inevitably seems to be the case) or you are catching a late night train, they can give you some respite from just sitting on the platform on the ground (there often aren’t that many chairs on the platform) and there are also some bathroom facilities here.  However, they can be pretty busy: as always there is never any shortage of travellers in India!  Also no one has ever asked to see our ticket and so am not entirely sure everyone in the waiting rooms is holding an AC ticket.  It’s also fair to say that some of the waiting rooms have seen better days: a number of them have broken seats etc.

In fact at Kolkata station, we made a mistake and ended up in the “Reserved Lounge” which we were pleasantly surprised to find was pretty deserted: in fact it turned out that this was an extra special lounge (although it wasn’t entirely clear for whom it was reserved) and we should have been in the far busier one a few doors down the concourse.  However, as no one challenged us at any point and we only realised our mistake pretty late on, we just enjoyed the relative peace before boarding our train.

On “special trains” like the Toy trains, there are completely different classes in play.  On our Darjeeling Toy train (which was a special tourist train with a special tourist price to boot) we were in First Class.   This was a very short journey but pretty comfortable.

From Kalka to Shimla, we were in AC Chair Class.  However, the only AC in evidence here was from open windows (there weren’t even any fans!!) and the seats were pretty small so we were all squashed in together.  The seats were also pretty hard which you began to feel after 4 hours (the journey was over 5 hours).  On the way back down, we were in First Class: rather disappointingly, this was not much better than on the way up except we were in a private compartment for 5 people and were less squashed in (but unfortunately the seats were just as hard and uncomfortable).  The only reason this was a little galling was because when we had arrived at Shimla a few days’ before, we had seen a train ready to depart that had very luxurious deep cushioned seats.  So we had been rather hopeful that we might be making the return journey in that sort of comfort.  Alas, it was not to be! 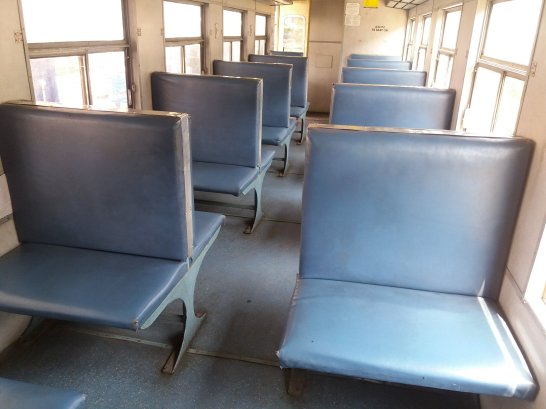