If the question is, do Indian trains run to their scheduled timetable (or say within 10 or 20 minutes of those printed times), then the answer has to be a pretty resounding “no”. However, if you adopt the more relaxed approach to timekeeping that the trains themselves seem to adopt, then quite often they do arrive within 1½ to 2 hours of their allotted time which, given the length of some of the journeys, is not too bad (or maybe we’ve just become conditioned to it).

One thing to note is that all the passengers seem to be fairly stoical in respect of the delays and no one seems either surprised or unduly stressed by any of the timings.  It really is what it is and everyone seems to take it on the chin. And I thought the British were meant to have a stiff upper lip but I don’t think you’d ever see this level of patience exhibited at Waterloo station in the face of any of these sorts of delays; far from it.

Of course you can bet your bottom dollar (rupee) that the trains that will run to time are those that are arriving in some major city at a godforsaken hour.  For example, we wouldn’t have minded if some of our 05.20 arrivals in Delhi, Bikaner or Mysuru had been delayed by say 3 hours allowing a bit more time to sleep and to summon up the energy necessary to tackle the rickshaw drivers and the hotel staff to see whether there was a chance of an (extremely) early check in.  But oh no, those trains always seemed to run pretty much to schedule!

Perhaps more frustrating still though are the trains with early arrival times which aren’t met: the difficulty is you still have to be awake particularly where your disembarkation point is not the final destination of the train as clearly, you don’t want to miss your stop.  Also, you can’t just assume that because the train was running approximately 3 hours’ late when you went to sleep, that that will still hold true in the morning. The timetable seems to have some built in slack in it and so it is not impossible for the delay to be shortened or, equally possible, to lengthen further while you are sleeping. With no indicator boards or announcements on the trains themselves, it’s up to you to keep a track on the train’s progress, typically by the old fashioned method of looking out of the window and checking platform signs, just hoping you can spot one in English (which sometimes can be a little tricky). 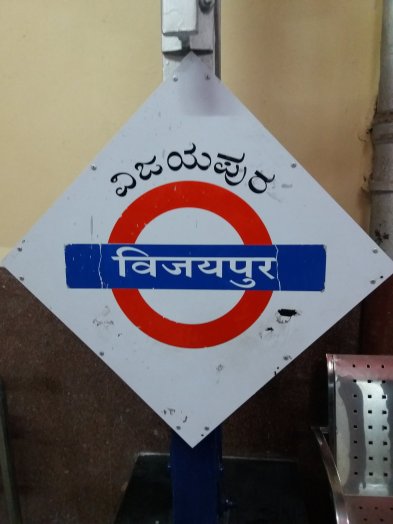 Our most delayed train (to date) was from Sawai Madhopur to Ajmer (near Pushkar) in Rajasthan back in mid November last year.  When we arrived at Sawai Madhopur station, the indicator board was already showing a 5 hour delay. This only being our second train journey, we went off to query this with the station master. Taking what appeared to be quite a sense of pride in the matter (particularly the delay), he confirmed that yes the train was going to be about 5 hours’ late, adding with a big smile that the delay could increase further over the course of the day. It was he who introduced us to one of the phone apps which gives information about the status of trains and advised us to use that, as he explained that that was all the information he himself had despite being an Indian Railways official.

That day, we called it quits and got a taxi instead. A wise decision in the end as the train ended up being over 10 hours’ late and at the time it left Sawai Madhopur (which, according to the app, was at 21.23) to start what would have been our 4 hour or so train journey, we were already back in our hotel room after a nice dinner out in Pushkar.

And before you ask, yes there is a refund process. BUT it is not straightforward (no surprises there) and we lost out on this occasion as we didn’t submit the TDR (ticket deposit receipt) to cancel our ticket in time, thereby rendering our refund application invalid.  It has to be submitted 30 minutes before the scheduled departure of the train which seems a little harsh. It’s all in the small print somewhere but boy is it a minefield!

Our longest other delay (to date) has been 5 hours. Still, it could have been worse, if we’d taken the same train the day before to make the journey from Varanasi to Kolkata, we’d have been over 8½ hours late. So in that context, we lucked out! And no, no refunds for the delay as we still travelled.