“Raising a daughter is like watering your neighbour’s garden”: this is a rather bitter Nepali proverb but perhaps summarises some of the general negative attitudes towards women that can be found in Nepal – in particular, the perceived value of women (especially in the rural areas).

In Pokhara, I was working with other volunteers on the “Women’s Empowerment” project.  During my stint of volunteering, this focussed on teaching English and Maths to Nepali women, some of whom (for various reasons) either did not attend at school at all or did not complete their education.  Apparently only 44.5% of females in Nepal are literate and there are significant problems with regards to domestic violence as well as the trafficking of women.  One of the key aims of the volunteering project was to improve lives of women through education with the hope that this would then provide greater opportunities and a better quality of life.

While working on this project, we taught women of varying ages in different locations.  The levels of English varied from group to group as did the women’s personal drive and levels of attendance.  Some days of teaching were also easier than others: on some days, I felt I made some excellent progress but at other times, when I thought I was asking simple things e.g. “what is the weather like today?” and only seemed to get the question repeated back to me rather than any semblance of an answer, it was a little harder going.  And this was in spite of having spent a significant amount of time and energy (as well as using my best artistic skills) to go through many different types of weather.  But a lot of humour got us through and it was pretty rewarding when it “clicked” the next time.  My acting skills were also tested thoroughly (even if I say so myself, I think I deserve an Oscar for my explanation of a “dramatic fall” which came up during a comprehension exercise). 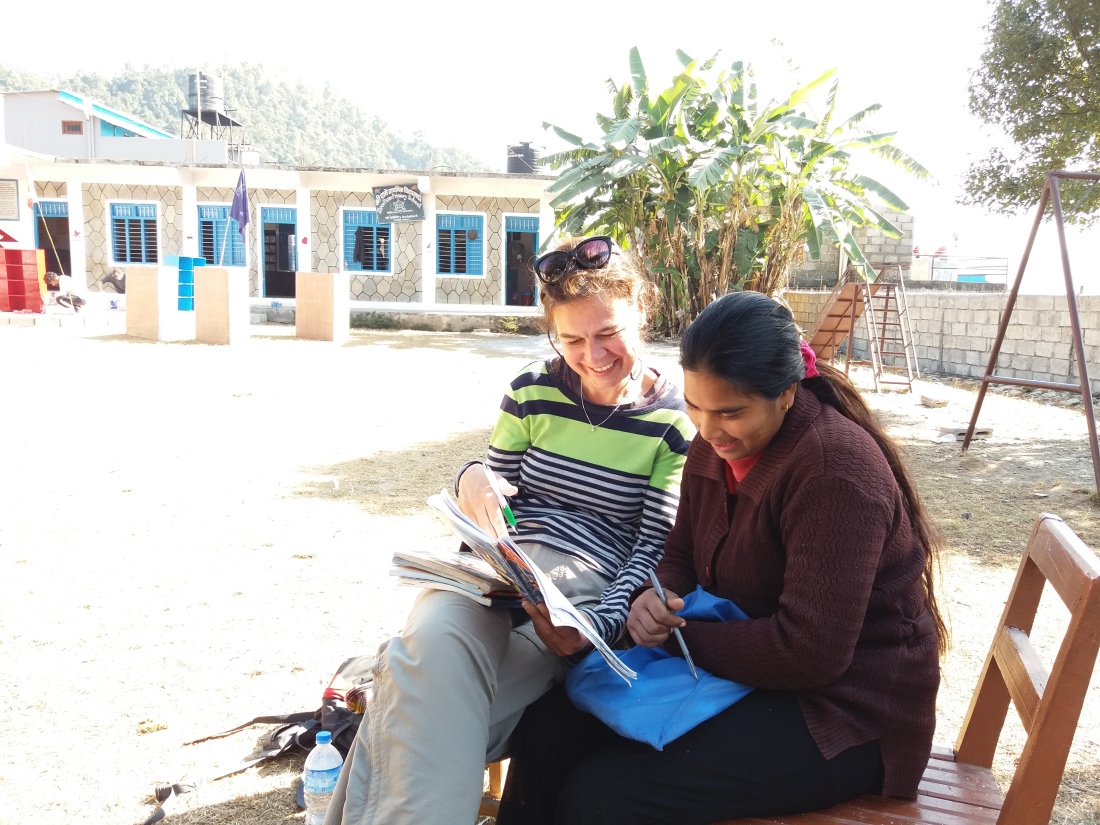 As well as working with some ladies on an individual basis, we ran English conversational classes for young women who were training to be female trekking guides. Here we focussed more on trekking vocabulary and we acted out various scenarios relating to altitude sickness etc and other such potential hazards.  I was pleased that my recent experience of trekking the Annapurna Circuit came in use here.

Some locations where we taught were quieter than others – the most challenging was probably in the village of Pame where we were based at two schools, one of which was the local government school.   As we often held our lessons outside (usually it was warmer sitting in the sunshine than staying inside), it could be fairly noisy and chaotic.  There were school kids who seemed to be running riot and/or who were very curious to see what we were up to quickly resulting in the formation of crowds around us.  Just as the crowd seemed to be growing too large, I would note with relief the arrival of a teacher hoping that they would call the children back to their assigned class, only to find that the teacher was equally curious and would therefore also join the crowd!  This wasn’t always ideal as some of the ladies preferred a bit of privacy in their studies.  There was also other things going on as other volunteers (including Peter’s construction projects) were in full swing here: trying to focus with all this going on was a pretty big challenge.

We also worked at the rather grandly titled Little Daffodills English boarding school in Pame where children had to pay fees to attend (although apparently there were a large number of bursaries).  It’s only in the later grades (when the children are aged 15/16) that any of the children actually board just to help them with their studies for the final exams.  But despite the fact that this was a fee paying school, often teachers did not turn up leaving classes unattended.  When this happened (and let’s face it, it wasn’t hard to spot which classes didn’t have teachers!), we would step in to teach classes as well as supervising playground activities.  Trying to keep discipline in the class was a huge challenge and not one that we always met.

Unlike Peter who could see a finalised “product” at the end of his project, I didn’t have that specific and defined satisfaction.  However, albeit perhaps on a small scale, I did feel that I made some difference to the lives of the ladies with whom I worked and hopefully that will continue to be built on by future volunteers.  On my side, I take away the laughter and smiles and the warmth that was shared with everyone during this all too short a period.

On our final day, as part of a goodbye ritual, we were dressed by the ladies in saris and daubed with the red tika dots as a sign of good luck. 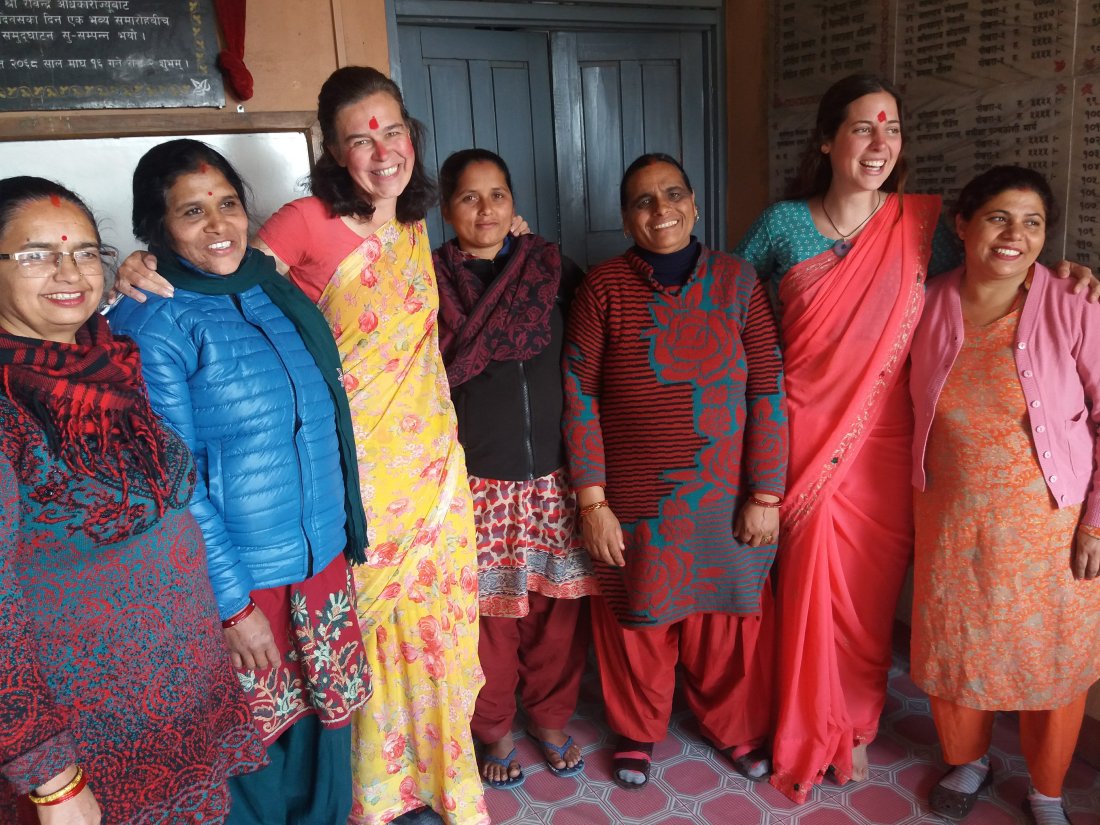 And in my best Nepali, “pheri bhetaula” (see you later). I hope we meet again.